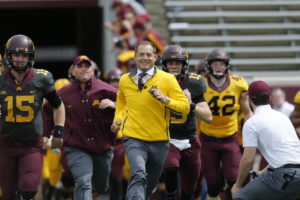 The Minneapolis Aquatennial announced today that new University of Minnesota football coach P.J. Fleck and his family will be the Grand Marshals of the 2017 CenterPoint Energy Torchlight Parade. Coach Fleck will help lead the largest nighttime parade in Minnesota on Wednesday, July 19 from 8:30 p.m.-10:30 p.m.

“The company feels privileged to be a part of the great city and community of Minneapolis,” said Brad Tutunjian, CenterPoint Energy division Vice President of Gas Operations in Minnesota. “To celebrate the strong relationship between the company and those who reside in the communities we serve, CenterPoint Energy is pleased to be sponsoring the 78th annual CenterPoint Energy Torchlight Parade for the seventeenth consecutive year, providing safe, quality entertainment for all.”

As one of the biggest and brightest parades in the state of Minnesota, and a Minneapolis Aquatennial flagship event, this one-of-a-kind display will light up downtown Minneapolis with a procession of bands and entertainment units marching down Hennepin Avenue from the Basilica of St. Mary to 5th Street.

“My family and I are honored to be part of the CenterPoint Energy Torchlight Parade,” said Minnesota head football coach P.J. Fleck. “Everyone has been so welcoming to us since we arrived in January, and I am looking forward to meeting more of our fans and embracing the local culture and traditions. I have heard wonderful things about this family-friendly event and how it helps bring a community together to celebrate our elite city of Minneapolis. I am excited to see all the decorative floats and parade units and to be part of the longstanding Aquatennial tradition. Ski-U-Mah and Row the Boat!”

The 2017 parade marks the 17th year that CenterPoint Energy has taken part in the Aquatennial festivities and sponsored the Torchlight Parade. The parade, along with the fellow flagship event Target Fireworks on Saturday, July 22 at 10 p.m., book-end four jam-packed days of Aquatennial events and programming that features more than two dozen free and family-friendly events throughout downtown and along the Mississippi Riverfront—where our city was born.

The Aquatennial has also partnered with the City of Minneapolis to bring Tap Minneapolis water fountains to the CenterPoint Energy Torchlight Parade. These water stations will be available along Hennepin Avenue during the parade as well as the Twin Cities Orthopedics Torchlight 5K, which runs down Hennepin Avenue from 7:30-8:30 p.m. Attendees are encouraged to bring their own water bottles to the event and utilize the many fountains along the parade route for refills. CenterPoint Energy will also be handing out clip-on lights to lucky parade-goers throughout the evening.

“Aquatennial will again feature four days of free activities this year, and the CenterPoint Energy Torchlight Parade is a great way to kick off the festivities,” said Aquatennial Festival Director Leah Wong. “There is something for all ages and abilities as we celebrate community and fun here in the heart of our city.”
Coach Fleck became the 30th coach in Gopher football history when he was hired on January 6. Fleck, 36, is one of the youngest and brightest minds in the game. He was named Mid-America Conference coach of the year in 2014 and 2016. He turned Western Michigan’s program around, turning a 1-11 Broncos team in 2013 during his first season into a 13-1 squad in 2016—winning the school’s first MAC championship since 1988 en route to a Cotton Bowl appearance.

The CenterPoint Energy is sure to ignite the Minneapolis night with more than 90 parade units and 75,000 spectators. For more information, please visit aquatennial.com or follow our @Aquatennial accounts on Facebook, Twitter and Instagram using the hashtag #Aquatennial.