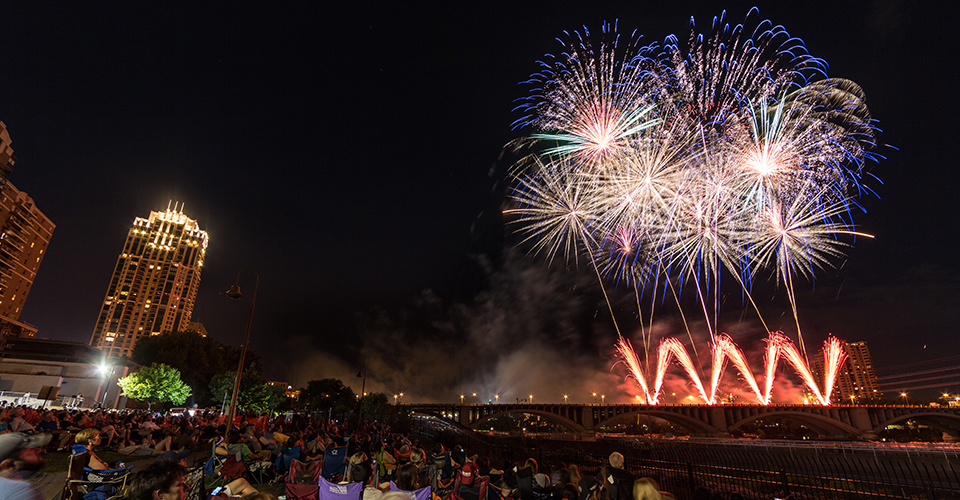 Zach Taminosian has been around fireworks all his life—from his days growing up in Fort Myers, Fla., setting them off in the back yard to his profession as one of Zambelli Fireworks’ show designers. But for all the thousands of hours he’s been around them in his life, he can pinpoint the moment he fell in love with fireworks and knew it was what he wanted to do for a career.

It was in Fort Myers, at the Minnesota Twins’ brand new spring training facility in 1991. The display put on to help christen the new facility left an imprint on him as a child, and it never went away.

“The fireworks that went along with the celebration really sparked my first interest in professional fireworks displays,” he said. “I loved fireworks growing up, but that was the first time I was intrigued with a choreographed show to music. And it ultimately led me back to Minnesota.”

Taminosian is annually the designer for the Minneapolis Aquatennial’s Target Fireworks, which take place tonight at 10 pm along the Mississippi River. The event is considered one of the top five annual fireworks displays in the country, and rightfully so. It attracts approximately 250,000 people to the Mississippi Riverfront near the Stone Arch Bridge, and the picturesque view of the Minneapolis skyline is the perfect backdrop for a nationally renowned show.

Each year, he said he directly works on more than 30 fireworks displays nationally and approximately another 200 shows indirectly through logistics, design and product ordering. But the Target Fireworks at Aquatennial always stand out.

It’s a pyromusical, if you will. The fireworks, which typically last 20-25 minutes, are a spectacle on their own. But they’re intricately choreographed to music, each blast matching with a note or a beat within the song playing. It takes Zambelli 2-4 hours of design time per minute of show duration to carefully match up the blasts with the beat, and that’s what makes this show extra special. This year’s music is 1980s themed as Aquatennial celebrates its 80th anniversary.

You can hear the music on-site as you’re watching, but if you are within view of the fireworks from another location you can listen to the simulcast on KOOL 108 FM.

The time and effort put into making this fireworks show special is personal for Taminosian, who thinks back to that display in Fort Myers 25 years ago when he arrives in town. This is a nostalgic display for him personally, but he also understands the importance the Target Fireworks play for Minneapolis and Aquatennial goers.

“This is one of my favorite shows,” Taminosian said. “I love Minneapolis. I love coming here every year. Just the backdrop, the downtown Minneapolis cityscape, and the bridge architecture is just an amazing canvas for me to paint.”

And of course, there is a major fireworks display that’s worth the wait.

“This show is designed with the audience in mind,” Taminosian said.